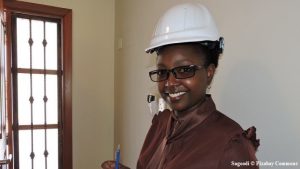 Workers, technicians, engineers… In France, women are increasingly present in the field of public construction and public works (called “BTP” in French). Sylvie, manager of a small building company, has easily found her place in an area that was before considered “male only”. She thinks that women are an asset for the profession:  “They are competent, bring new ideas and change working conditions”, she says. Sylvie is part of the 27% of women who run small and medium-sized companies (called “PME” in French) and very small companies (called “TPE”). Despite some improvements, the construction industry counts only 1 woman for 10 men. However, women have their role to play! So ladies, do not hesitate to enter the game. Work is key to gender equality!