Why would I go to church, a synagogue or a mosque if it’s not my religion? 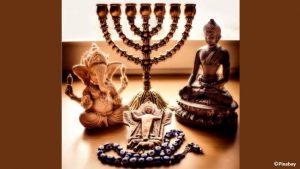 Last month, Yves invited his neighbor’s son, Djibril, to come with him to an unusual visit: the local synagogue. “A Muslim has nothing to do in a synagogue, nor in a church,” first answered the boy’s dad. “Djibril goes to the mosque and it is all he needs !”

Yves was expecting this reaction: Jewish and Christian parents are not always wanting their children to go to other cult places than their own. What for?

“To know yourself better and to better understand your friends,” Yves always answers. He doesn’t believe in any god, but anyway! With his association, he takes religious and non-religious children for tours of churches, mosques, synagogues, temples… all the worship places that can be visited. His ambition? Get rid of taboos and prejudices around religions and atheism, present works of art and live laïcité.

“Being laïc” he explained to Djibril’s father “doesn’t mean you’re against the religions! It’s the opposite. It means allowing all of them to have their place in public space, without hate. And don’t be afraid for Djibril! Knowing more about Judaism or Christianism won’t convert him! See – I’m going to church, to the mosque, to the synagogue and to the temple, but I’m still not religious!”

How do Muslim, Christian or atheist foreigners live with French laïcité every day? It is in this video!
For more videos, go to Ensemble en France’s MOOC