My daughter is a superhero. Is it a problem? 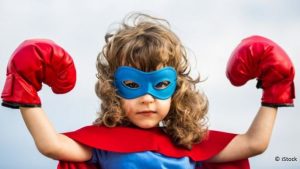 My daughter, Khizran, doesn’t like dresses and doesn’t play with her doll often. She is more into toy cars and football. Recently, she has been refusing to wear her fairy costume. She would rather dress up as a superhero! Sohail, my husband, is sorry to see his “little princess” play with boys’ toys. He would like her to be always wearing pink and playing quietly in her room.

At our next-door neighbors’, it is the contrary: their little boy, Djibril, is playing with the doll’s tea set and goes around with his doll. But this is not a problem to his father, nor to Aïssata, his mother, who is a teacher. “Djibril is interested in all games, so much the better, it is developping his personality and his curiosity,” she says “He is not 3 yet, he doesn’t know what a “girls’ game” or a “boys’ game” is. School, friends, advertising will teach him soon enough! I think that at that moment, he will ask for Khizran superhero costume! And Khizran will ask for his toy oven to cook some pizzas! Sohail should not be worrying about his “little princess”. Playing football won’t stop her from wanting children and maybe even a husband!”.

As far as I am concerned, I would be happy if Khirzan was keeping her costume for a longtime, if she was growing up and building her future as a superhero and if she was thinking that she can be strong, brave, ambitious in life and not only a sweet, caring, dreaming princess. Therefore, whatever the costume, I will always make sure she stays a superhero!

Equality in France is not only a word of the Republican motto. It is also a value that is shared in everyday life, especially gender equality.
For more videos of foreigners living in France and much more, go to Ensemble en France MOOC.