Why are there no religious meals at the school canteen? 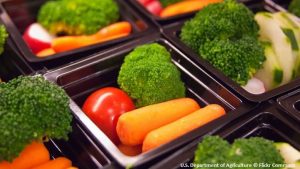 This year, Myriam will enter preparatory course (CP) and will eat for the first time at the school canteen. Her parents, Alexandre and Sarah, are worried: they are practising Jews and fear that their daughter will have the obligation to eat food that does not fit the rules of their religion. In public schools in France, there are no religious meals (neither kosher nor halal) and sometimes there is pork at the canteen.

“Don’t worry, said Myriam’s teacher. In our school, like in most schools, when there is pork, there are also other dishes: chicken, fish or a vegetarian menu so that all children can eat together, whether they are Jews, Christians, Muslims or Hindus.”

These explanations reassured Myriam’s parents: their daughter was afraid she wouldn’t know what to eat at the canteen and thought that she would have trouble making friends.

“You know” explained the teacher “putting laïcité on the plate adds fraternity to the table!“.

Laïcité was not as bad as what Alexandre and Sarah had imagined. Their daughter wouldn’t go against the principles of religion by eating at the canteen. And with such a nice teacher, they didn’t doubt that Myriam was going to feel very well at her new school!