Why can’t my daughter wear the veil at public school? 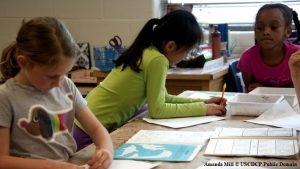 When Leila came to join her husband in Lyon with her two children, she knew nothing about what French people call laïcité. In Afghanistan, she had only been told that laïcité was “against Islam”. Since she arrived in France, she is starting to understand that it was wrong: her husband can go to the mosque without any problem. But Leila thinks that laïcité is weird: if she can wear the hijab in the street and at university, where she has resumed her studies, why is her daughter not allowed to wear it at primary school?

The teacher explained to her that the school is not trying to remove family beliefs from children, but that it asks them to keep for themselves, in their intimacy, their Christian, Jewish or Moslem faith, or their atheism. He explained that this measure of neutrality brings children together around a common, universal knowledge, one that makes 2 + 2 = 4, and avoids potential divisions caused by their different beliefs. At university, students are adults and free to express their religious, political or philosophical convictions. What Leila finally understood is that her daughter would be free to choose to wear the veil or not after having learnt first to think for herself at school.

One of the roles of school in France: learning to separate beliefs and knowledge