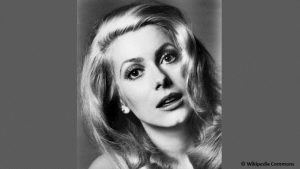 Catherine Deneuve was not the only famous woman who wrote down her name on the “manifeste des 343” – Françoise Sagan and Simone de Beauvoir signed it as well, but the actress knew that her signature would have a strong influence. By signing the “Je me suis fait avorter” (“I got an abortion”) petition, she was joining and supporting thousands of other anonymous women who didn’t dare say that they aborted in secret. In 1971, this revolutionary petition which could lead the signatories to jail stirred opinions and politicians. It was the purpose.
Yes! In France women had to fight to get to master their bodies, to be able to choose “if I want, when I want” to have children. But they went through years of fights, debates and protests to get there.
With this famous petition, they were publicly saying “no” to clandestine abortions which could lead to death, infertility or criminal prosecution. Their call was heard: abortion was legalized in 1975, with the law held by Simone Veil. Nowadays, in France, many structures allow women to be assisted in their desire to have a child… or in they will not to have any!