How to become a lady in gold? 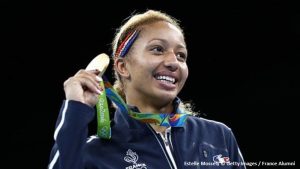 Estelle Mossely hits the ring as hard as life. That’s probably why getting an engineering degree was not enough: she had to become the first French Olympic champion in the history of women’s boxing. “It’s for my parents that I’m fighting. I need to take revenge,” she says. Born in France of a Congolese father and a Ukrainian mother, Estelle Mossely wanted to succeed for them. When they arrived in France they had to start their lives from scratch. Estelle Mossely fights a lot in the name of others. She founded the European Observatory for Women’s Sport to put K.O. prejudice and makes boxing more accessible to girls. “Do it if you want to” remains her best advice to lead girls into the ring and guide them in life: sometimes it leads to gold!

Estelle Mossely won the gold medal at the 2016 Olympic Games: a portrait of a boxer who never lets go.