Memories of an immigrant 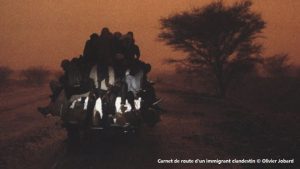 “After waiting 7 days, they put us, 35 men, one on top of the other, roughly balanced, in the back of a 4×4. I am afraid to fall but I am even more afraid of being robbed…” After going through the desert, Kingsley, a 22-year-old immigrant from Cameroon, crossed the Atlantic and was many times close to death before he reached Europe, then France.

Today, you can find “the logbook of Kingsley, an illegal immigrant” in the collections of the National Museum of Immigration, in Paris. His journey was documented by a photographer Olivier Jobard for 6 months. The resulting pictures really have their place in this remembrance place, they show new forms of migrations that stay, whatever the period, big human adventures. Migrations contribute to a country’s economical development and its socio-cultural evolutions. That’s the reason why they have been changing the face of France and French identity for two centuries.

Kingsley’s mother advised her son when he left: “Be a wise boy in Europe, don’t create problems. Don’t forget about your family”. It is likely that the same advice was given, in other times and countries, to Manuel, Ohannès, Giorgio, Emilio, Baptista, Taoufik, Missak, Tran, Nouredine, Thonn, Abdeslam, Sako, Ismael, Nadia, Houssen… The ones that, among others, let their names and their life marks at the National Museum of Immigration. This museum shows a side of French history that must be passed on without moderation to better fight racism and xenophobia.

Thousands of citizens from ex-French colonies lost their lives to defend the French flag during different conflicts…
For the full video, go to Ensemble en France’s MOOC