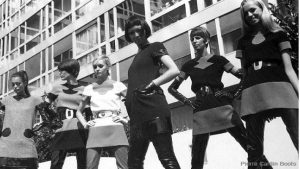 “Free your feelings” – that was Mary Quant’s cry in 1960 when she created the miniskirt. This clothing item, very audacious at the time, marked the arrival of the women’s liberation movement which would later conquer the Western world. If the miniskirt still symbolizes this revolution, Sophie doesn’t think of what it represents every time she wears a skirt, but some days she can’t help it… Because if wearing a skirt means being a modern and independant woman, it also sometimes comes with macho comments. Yes, it still exists, 70 years after the creation of the miniskirt!

Sophie often wears a skirt to go to work or to go out with her friends, but she doesn’t wear it to go everywhere. One bad experiment was enough for her and today, she is scared to attract bad looks, insults, harassment and vulgar or inappropriate signs. Some of her friends never wear a skirt, because it is the easy option, because they don’t want problems. If women can’t wear what they want to, if they are criticized for their feminity, for their freedom, can we really believe that the French society has improved?

At the high school where she teaches, a “skirt day” is organized every year to point out gender inequalities and to launch further discussion around sexism. She obviously encourages all her students to take part in the event, especially boys, who sometimes come with a kilt. A way to better understand what girls are going through in everyday life.

Sophie never thinks of Mary Quant when she gets dressed. But she is often feeling sorry that wearing a skirt is once again an act of protest. 70 years after, she is desperate: the feminist fight is still not won!

“The miniskirt, a long story”
Created by Mary Quant in 1965, the miniskirt has become a symbol of the fight of women – and the fight is still going on today