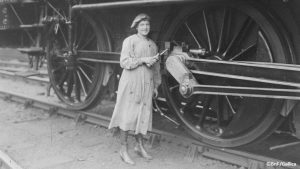 “Stand up, French women […]! Replace on the working field the ones that are now on the battle field!” called the president of the Conseil des Ministres, René Viviani, in August 1914. Because of the war against Germany, the country had then lost its male workforce. Women had to replace their fathers, sons and husbands who had left to defend the country.

In the newspapers and on the posters, the advertising was echoing this call – women had to get out of their households to fill the recently empty positions in factories, schools, hospitals… World War I deeply transformed the French society.

With this first step towards roles equality, women freed themselves – they adopted the “garçonne” haircut and got rid of their corsets. It was also the beginning of feminist claims, with the “suffragettes” requesting the right to vote for women and the “midinettes” – dressmakers that decided to strike.

Even if, by the end of the war, the path towards gender equality was still long, World War I was the occastion for women to free themselves from their status as wives and mothers. And thanks to these pioneers, women have the possibility, one century later, to be stay-at-home mothers just as much as surgeons or mechanics.

For the full video and many others, with subtitles in 7 languages, register in Ensemble en France’s MOOC. It is free!