The secret of Paris’ Great Mosque 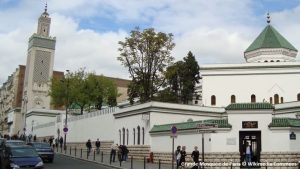 A 33-meter minaret, multicolored mosaics and a carpet of wool covering the ground: the great Mosque is fascinating. But behind all this beauty lies a great story. The Mosque was built to pay tribute to the fallen Muslim soldiers of WW1 in France. Because thousands of fighters from French-speaking Africa and the Maghreb have left their blood on the battlefield for the French flag. On the Mosque’s inauguration day in 1926, a message echoed: “Muslims will feel that France and Paris welcome them not as strangers, but as brothers”. But this place of worship has also helped other communities. It served as a place of refuge and assistance for Jewish families during WW2.